21 Things You May Not Have Known About the Indian Act


Many laws affecting Indigenous Peoples were combined in 1876 to become the Indian Act. The Act gave Canada a coordinated approach to Indian policy rather than the pre-Confederation piece-meal approach. 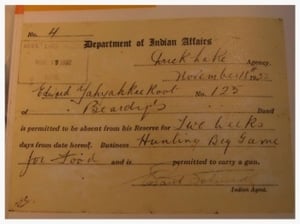 The Indian agent, acting under the authority of the Indian Act, played a key role in the distribution of land, replacing traditional names for "easier" identification and altering traditional and hereditary forms of government, among other actions and restrictions.

The Indian Act has been a lightning rod for criticism and controversy over the years, widely attacked by First Nations people and communities for its regressive and paternalistic excesses. For example, Indians living on reserves don’t own the land they live on; assets on reserve are not subject to seizure under legal process making it extremely difficult to borrow money to purchase assets; and, matrimonial property laws don’t apply to assets on reserve. On the other hand, it has also been widely attacked by non-Indigenous people and politicians as being too paternalistic and creating an unjust system with excessive costs that are considered uneconomical.

Here are some of the restrictions and impacts imposed on First Nations (some have since been removed in revisions of the Act).

Major amendments were made to the Act in 1951 and 1985. In the 1951 amendments, the banning of dances and ceremonies, and the pursuit of claims against the government were removed. In 1985, Bill C-31 was introduced. For more on this Bill, please see: "Indian Act and Women's Status - Discrimination via Bill C31 and Bill C3".

The Indian Act imposed great personal and cultural tragedy on First Nations, many of which continue to affect communities, families and individuals today.

Thanks for reading this blog article. Here are some of the references we used:

An Act for the gradual enfranchisement of Indians, the better management of Indian affairs, and to extend the provisions of the Act 31st Victoria, Chapter 42. [Assented to 22nd June, 1869.]

CHAP. 18. - An Act to amend and consolidate the laws respecting Indians.

The above article has drawn so many readers since it was first published, Bob decided to write a book based on the article. The book was a national bestseller within the first week of its publication. Order your copy today.

Bob Joseph, founder and President of Indigenous Corporate Training Inc. (www.ictinc.ca), has provided training on Indigenous relations since 1994. Each year he assists thousands of individuals and organizations in building Indigenous relations. His Canadian clients include all levels of government, Fortune 500 companies, financial institutions, including the World Bank, small and medium-sized corporate enterprises, and Indigenous Peoples.  Bob is the developer of a multi-layer suite of Indigenous relations training courses and the author of the national bestseller 21 Things You May Not Know About The Indian Act