The Pow wow A Primer on the First Nation Pow wow

This is the first in a series of articles on the First Nation pow wow - short history, the dances, the drums, the songs, and the all important protocol. 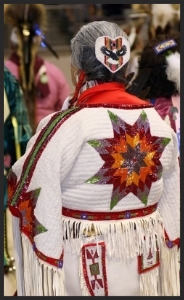 What is a pow wow? A pow wow is a celebration of dance, drums and songs - they are a tradition, a festival, a competition, a reunion, an arts and crafts venue, a food fair - one word cannot encompass the many facets of a pow wow; they are a feast for all five senses.

There are a few thoughts on the origin of the word pow wow. Some hold that it is an adaptation from “pau wau”, an Algonquin word for "medicine man" or "he who dreams”. Others sources say its origin lies in the Pawnee word pa-wa, meaning “to eat”. According to Merriam-Webster, the word is either Narragansett "powwaw" or Massachusett "pauwau".

Generally speaking, pow wows originally were gatherings to celebrate a successful hunt or victorious war party and the dances seen at today’s pow wows have their roots in those events. Under the Indian Act, pow wows were forbidden unless sanctioned by the government for parades and celebrations. In Saskatchewan, Father Hugonard, an infamous principal of the Qu’Appelle Indian Industrial School, fought tenaciously to have pow wows and all other cultural ceremonies and activities banned. He persuaded Duncan Scott, Deputy Superintendent General of Indian Affairs, to send a letter to all Indian Agents ordering as follows:

It is observed with alarm that the holding of dances by Indians on their reserves is on the increase, and that those practices tend to disorganize the efforts which the Department is putting forth to make them self-supporting. I have, therefore, to direct you to use your utmost endeavours to dissuade the Indians from excessive indulgence in the practice of dancing. You should suppress any dances which cause waste of time, interfere with the occupations of the Indians unsettle them for serious work, injure their health or encourage them in sloth and idleness. It is realized that reasonable amusement and recreation should be enjoyed by Indians, but they should not be allowed to dissipate their energies and abandon themselves to demoralizing amusements. By the use of tact and firmness, you can attain control and keep it, and this obstacle to continued progress will then disappear. Duncan Scott to Agents and Inspectors, RG10, Volume 3826, file 60,51101 Part 1 (August 19, 1915)

Following amendments to the Indian Act in 1951, pow wows have been held without interference. Today, pow wows are a sheer celebration of being Aboriginal and a testament to the tensile strength of the connection First Nations have for their cultural heritage. While many of the traditions around pow wows are rooted in the past, pow wows today are artistic and evolving celebrations.

Pow wows are held throughout Canada and the United States. The pow wow season runs from spring until fall. Traditional pow wows are gatherings with open dances for all to join but others involve dance competitions, with large cash prizes. There is a term “following the pow wow trail” which means travelling to all the events to compete and earn money - similar to rodeo circuits. In fact, many pow wows are held in conjunction with rodeos with riders and dancers competing in both - talk about cross-training!