What is an Indigenous Medicine Wheel?


There isn’t a simple answer to the question as medicine wheels (sometimes called hoops) come in more than one form, and their significance and use are culture-specific. There is, however, one fundamental similarity besides the shape - medicine wheels represent the alignment and continuous interaction of the physical, emotional, mental, and spiritual realities. The circle shape represents the interconnectivity of all aspects of one’s being, including the connection with the natural world. Medicine wheels are frequently believed to be the circle of awareness of the individual self; the circle of knowledge that provides the power we each have over our own lives.

Two images jump to mind when thinking about medicine wheels. One is the ancient stone version. According to the Royal Alberta Museum, "a medicine wheel consists of at least two of the following three traits: (1) a central stone cairn, (2) one or more concentric stone circles, and/or (3) two or more stone lines radiating outward from a central point. Using this definition, there are a total of 46 medicine wheels in Alberta. This constitutes about 66% of all medicine wheels known. Alberta, it seems, is the core area for medicine wheels."

How long ago stone medicine wheels were first created is still up for discussion but some have been dated to 4000 BC, which is when the Great Egyptian Pyramids were built; there are suggestions that the Bighorn Medicine Wheel, the largest and oldest, could be millions of years old. The original name for medicine wheels was “sacred circles” - the term “medicine wheel” was coined by non-Native Americans in response to the Bighorn Medicine Wheel, Wyoming, the largest in North America, around the turn of the previous century. 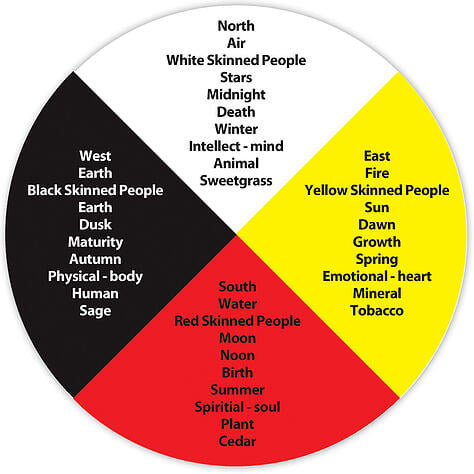 The other familiar medicine wheel image is the iconic circle divided into four separately coloured quadrants. The number four has great significance in most Aboriginal cultures. The black, white, red, and yellow medicine wheels that we frequently see in logos, on drums and in art are all somewhat different. The one shown here is a compilation of some of the many attributes or powers that can be included in the medicine wheel. This one does not include the inner circle, or centre, which is usually green and given the attributes of learning, self, balance and beauty. Certain culturally significant animals, being part of the natural world, are also often included.

The medicine wheel is interpreted uniquely by each culture. The order of the colours is not the same in each culture, nor are the attributes, and it would be wrong to make a sweeping generalization that indicated otherwise. The next time you see a medicine wheel, take a moment and think about its history and cultural significance.