What are Appropriate Gifts for Indigenous Guest Speakers

This article goes out to all the people who organize events that include Indigenous speakers and we thank one of our readers for suggesting we write on this topic. 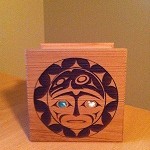 Conferences, forums and speaker series are increasingly including  Indigenous speakers to provide their perspective on the event theme.  This is a positive trend that supports the view that Indigenous  perspectives and input are respected and valued. Indigenous speakers  are in high demand if the number of invitations I receive are any  indication. It is par for the course for speakers to be presented with  a gift, travel and honoraria as a token of appreciation for the time taken to prepare the presentation and travel to and from the event. But, a word of advice to event planners and planning committees, care needs to be taken when choosing appropriate gifts for Indigenous guest speakers and here’s why.

The Indian Act and Alcohol

Alcohol was introduced to Indigenous Peoples in Canada by Europeans as a trading commodity for furs and tobacco. Its addictive properties made it a priority choice for Indigenous fur traders who brought it home to their communities. The addictive nature of alcohol played nicely into the paternalistic policies of the federal government:

(In the following quote the term “Indian” is used as that is the legal term in the Indian Act).

The prohibition continued until 1985 when Bill C-31, an Act to amend the Indian Act, was passed.

The increasingly strict rules regarding alcohol possession and consumption resulted not in abstinence but rather it forced people to hide in bushes, alleyways, abandoned buildings and to consume as quickly as possible.

Were there parallel fines and laws regarding non-Indigenous drinkers? There was the period of prohibition in Canada beginning in local municipalities in the late 19th century, spreading to provincial bans in the early 20th century, and eventually to national prohibition (a temporary wartime measure) from 1918 to 1920.

Alcohol abuse among Indigenous Peoples is just one of many health issues plaguing some, not all, Indigenous families and communities. For some it is a coping mechanism to deal with the soul crushing, intergenerational and ongoing impact of residential schools, relocation policies, broken cultures, lost languages, loss of identity, racism, scarcity of employment, lack of access to equitable education, poor housing, contaminated water…..the list is long. To reduce alcohol addiction the many contributing factors need to be addressed en masse.

I should also note that alcohol addiction is present pretty much everywhere in the world where alcohol is available.

“The third leading risk for burden of disease in Europe is alcohol use, and alcohol consumption is almost double the global average.” [2]

The proportion of First Nations adults in First Nations communities who report heavy drinking on a weekly basis (9.8%) was somewhat higher than that for the total Canadian population (8.0%) [3]

We also want to offer some sober thoughts on the myth that Indigenous Peoples have a genetic intolerance for alcohol. Please read “Aboriginal Alcohol Intolerance”.

When Working Effectively with Indigenous Peoples™ we cannot stress enough the importance of doing your research. This applies to choosing gifts for Indigenous guest speakers. Has their community been involved in legal disputes or blockades? Consider the impact the gift may have on the recipient. You wouldn’t give golf merchandise to someone from a Mohawk community as in 1990, the Kahnawake Mohawks fought bitterly against the town of Oka expanding a golf course on disputed territory that included a Mohawk burial ground. Similarly, you wouldn’t give ski passes to an Indigenous speaker whose community protested a ski hill in their territory.

Here are some suggestions for event organizers who want to give Indigenous-made gifts:

If you are managing an event on behalf of an Indigenous community ask your liaison what they would like to offer as a gift. Small pieces of handiwork made by community members is always appreciated as a memento of the speaker’s connection with that community. Not only does it support artists in the hosting community but it carries that community’s culture into a broader audience.

We managed a business development event for a group of First Nations. The chief we were liaising with on development of the event had a long standing tradition of mentoring Indigenous inmates at a nearby institution. The chief provided the cultural materials and the inmates made the gifts. The speakers, Indigenous and non-Indigenous alike, recognized and valued the significance of the backstory on what they held in their hands. The inmates also made the art that was auctioned off to raise funds for a new playground for that chief’s community.

If you are giving Indigenous art please ensure it is authentic. And be sure it is representative of the medium. For example, a bentwood box should be made by an artist whose culture includes bentwood boxes. If you are hosting an event, say in Squamish territory, and want to honour that Nation, choose art that is made by Squamish artists.

Personally, as someone who has organized many conferences, and events, I would never give alcohol as a gift to any speaker because unless you know them on a personal level you can’t safely assume alcohol is appropriate.

If you want something impactful, a card showing a donation to a not-for-profit Indigenous organization on behalf of the speaker is always a heart warmer and can fit within any budget and carry-on luggage!

As for me,  if you are giving me an honorarium to speak at your event, covering my travel and accommodation there is really no need for a gift. A simple recommendation or testimonial is valued and appreciated.

BTW: I cover gift giving in my Working Effectively with Indigenous Peoples™ training which is available on-site for your team, publicly and now in a virtual classroom platform. Please visit our website for more information or contact us directly by clicking the button.

Worried about doing or saying the wrong thing at your next meeting with Indigenous Peoples? Download your copy of our eBook with 23 tips that will help steer you away from creating awkward moments.

[3] A Statistical Profile on the Health of First Nations in Canada: Determinants of Health, 2006 to 2010