What are Aboriginal Rights

“The doctrine of Aboriginal rights exists… because of one simple fact: when Europeans arrived in North America, Aboriginal peoples were already here, living in communities on the land, and participating in distinctive cultures, as they had done for centuries. It is this fact, and this fact above all others, which separates Aboriginal peoples from all other minority groups in Canadian society and which mandates their special legal status.” [1] 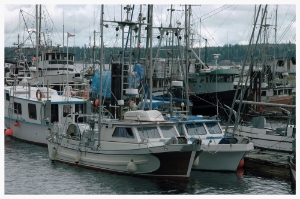 Aboriginal rights were defined in the Royal Proclamation in 1763. The Royal Proclamation is regarded as early and powerful evidence of the recognition of Aboriginal rights in Canadian law. This recognition paved the way for the Supreme Court of Canada to rule in a series of cases beginning with Calder that Aboriginal title both pre-existed and survived colonial occupation. In that light, these are the Proclamation’s key words “. . .  any lands that had not been ceded to or purchased by Us as aforesaid, are reserved to the said Indians.” [2]

In addition, the Royal Proclamation also recognizes Aboriginal rights to harvest resources from their traditional territories. The principle is acknowledged in that the Aboriginal lands are “…reserved to them, or any of them, as their Hunting Grounds” [3]

This is a good description of what Aboriginal rights are:

“Aboriginal rights are collective rights which flow from Aboriginal peoples’ continued use and occupation of certain areas. They are inherent rights which Aboriginal peoples have practiced and enjoyed since before European contact. Because each First Nation has historically functioned as a distinct society, there is no one official overarching Indigenous definition of what these rights are. Although these specific rights may vary between Aboriginal groups, in general they include rights to the land, rights to subsistence resources and activities, the right to self-determination and self-government, and the right to practice one’s own culture and customs including language and religion.” [4]

The Aboriginal perspective of their rights is generally of a broader scope – their rights, as stewards of the land, include responsibilities to family, land and environment.

The courts have also said that constitutionally recognized practices, customs or traditions can evolve to a modern form. Fishing is a good example of a right that has evolved from harvesting by hand using nets or spears to high tech fishing equipment and power boats.

Commercial rights to sell fish have been established and confirmed via the court. Applicants have to establish that, prior to contact with Europeans, their ancestors engaged in the practice of fishing and trading or selling fish and that this practice was an integral part of their distinctive pre-contact Aboriginal culture.

The full scope of what Aboriginal rights are and the numerous legal challenges that resulted in defining those rights is far greater than what is presented in this article - this is just a primer. We encourage everyone interested in learning more on this important aspect of Aboriginal People's struggles for identity and rights to do further reading. Here are a couple of court case summaries to further your understanding: Delgamuukw and Gisday'way and Sparrow

Here's a free ebook for you that provides summaries of the foundational Supreme Court of Canada rulings. Just click the image to grab your copy.