Was There an Upside to Residential Schools?   Answer: No


"I speak partly for the record, but mostly in memory of the kindly and well-intentioned men and women and their descendants — perhaps some of us here in this chamber — whose remarkable works, good deeds and historical tales in the residential schools go unacknowledged for the most part,"


"The fathers and sons and family members of the nuns and priests, to this day, have to bear the reputation as well, and nobody meant to hurt anybody," she said. "The little smiles in the Truth and Reconciliation Commission are real, the clothes are clean and the meals are good. There were many people who came from residential schools with good training and good language skills, and, of course, there were the atrocities as well…….I was disappointed in the Truth and Reconciliation Commission's report in that it didn't focus on the good. The people I talk to are Christians." Senator Lynn Beyak, a member of the Senate Aboriginal Peoples Committee, March 8, 2017 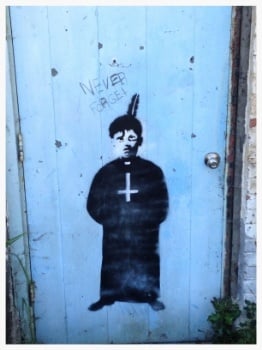 The comments made by Senator Lynn Beyak about the good done in and by residential schools have been largely interpreted as harmful to the many survivors, and their families, who continue to grapple with the impacts of their experiences at residential school. Why are they harmful? They are harmful because when you look at residential schools from the perspective of Canada’s Truth and Reconciliation Commission (TRC) the schools were branded as a “cultural genocide” activity. I ask Canadians to think about it for just a moment. Say the words in your head. Cultural Genocide. This alone should make it difficult to argue any good coming from the schools, no matter how well intentioned the people who were running them.


“At least they received a good education.”  Consider the following:


“Residential school students did not receive the same education as the general population in the public school system, and the schools were sorely underfunded. Teachings focused primarily on practical skills. Girls were primed for domestic service and taught to do laundry, sew, cook, and clean. Boys were taught carpentry, tinsmithing, and farming. Many students attended class part-time and worked for the school the rest of the time: girls did the housekeeping; boys, general maintenance and agriculture. This work, which was involuntary and unpaid, was presented as practical training for the students, but many of the residential schools could not run without it. With so little time spent in class, most students had only reached grade five by the time they were 18. At this point, students were sent away. Many were discouraged from pursuing further education.” [1]


Consider also the Statement of Apology by Prime Minister Stephen Harper, and the apologies of the Anglican, Roman Catholic, Presbyterian and United churches. They did not apologize because of the good work and good deeds.


Here are some other reasons why the comments made can be interpreted as harmful:


My intention in raising the previous points is not to make people feel guilty or shameful but to put the focus on where we are now as a country. Reconciliation. In the context of reconciliation there is an “upside” to these comments because it is comments such as these that draw attention to reconciliation. My hope is that Canadians will take comments like these and begin to personally explore and understand the truth about residential schools and search for reconciliation within themselves and their fellow Canadians.


Someone once told me that we are to remember the past, live in the now, and plan for the future. From this perspective, reconciliation is about remembering and acknowledging the past, reconciling now, and planning for a great future....comments such as the ones made recently give us all a chance to push towards the higher ideals of reconciliation.


It’s easy to deny or shame for wrongs done in the past. It’s much harder to reconcile. But, we have made significant collective steps with apologies and commissions and right now the door is open for us to create a better future for all Canadians.

In our training we work hard to provide a safe environment for all learners who are free to ask questions, make comments, or statements at any time during the training. If you are looking for Indigenous awareness training or training that takes you beyond awareness, please contact us or visit our website Indigenous Corporate Training Inc. We've been designing courses and delivering training since 2002.