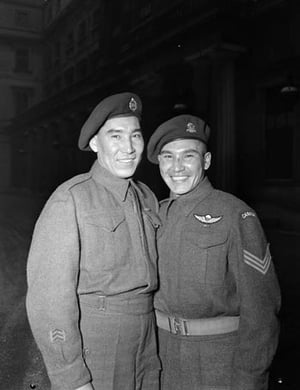 The story of Thomas "Tommy" George Prince, Canada’s most decorated Indigenous soldier, is inspiring and tragic. It also underscores the inequality that Indigenous soldiers experienced upon returning home after risking their lives to fight under the Canadian flag.

Tommy George Prince, born in 1915 on the Brokenhead Reserve in Manitoba, came from a long line of men who were distinguished in battle - family members fought for the Crown in the Red River Resistance in 1870, led the Nile River Voyageurs in 1885, and fought in World War I.

While at residential school, he enrolled in Army Cadets and felt that first thrill of wearing a uniform. He signed up with the Canadian Engineers in June 1940 and shipped out to England shortly afterwards. The boredom of life as a sapper in England frustrated Prince, so he took up running and boxing as an outlet. When the call came for volunteers to join the newly formed First Canadian Parachute Battalion, Prince, longing for some excitement, volunteered and was among the very few accepted. The Battalion and the United States Special Force, otherwise known as the Green Berets, formed an elite bi-national unit, later referred to as the “Devils' Brigade” by the Germans. Recruiters recognized Prince as a unique asset due to his intelligence, extreme fitness, skill as a marksman, and ability to track, hunt, and live off the land. He excelled in the unit and quickly earned renown for his bravery, and cunning and audacious attacks on the enemy, behind their own lines, at times right before their eyes and frequently in the dead of night.

He was awarded the Military Medal (MM) and the Silver Star at Buckingham Palace in 1945. Prince was one of 59 Canadians awarded the Silver Star and was one of only three of this group who were also MM recipients - and is today recognized widely as Canada’s most decorated Indigenous veteran. Unfortunately, his countrymen only recognized his contributions to World War II and later the Korean war posthumously.

After the war, Prince, like many of his fellow veterans, found that life back home had changed due to their experiences on the battlefields. As a civilian, Prince found he was no longer treated with respect and was not even treated as an equal. Prince struggled to settle back into life on the Brokenhead Reserve but found it impossible - he wanted something better for himself and all Indigenous veterans. He was frustrated and disillusioned by the inequality he and his fellow veterans experienced compared to non-Indigenous veterans. He believed Indigenous veterans could be role models for younger people, but the restrictions and discrimination dealt to them by Veterans Affairs, such as paying out their grants to the Indian Agent rather than to the individual, stymied them from successfully establishing themselves in businesses. Restrictions within the Indian Act prevented veterans from learning about available benefits and programs. The bulletins, posted in Legion halls, were out of reach to Indigenous veterans because the Legions served alcohol; therefore, Indigenous People were prohibited from entering. Illiteracy rates were high so finding information through newspapers was seldom an option, and radios were a rare commodity.

The Manitoba Indian Association asked him to serve as vice president and chief spokesman; they hoped that a decorated war hero would have some impact in Ottawa. He was again a leader in battle, but this time with words and the battlefield was the House of Commons. It wasn’t a perfect fit for Prince because, as a man of action, he soon found the turgidity of life as a political spokesman tiresome.

Disillusioned with life, Prince re-enlisted for the Korean War with the Second Princess Patricia’s Canadian Light Infantry, where his bravery and strong leadership distinguished him once again. But, this gruelling war took its toll on him physically and emotionally. He developed Post Traumatic Stress Disorder and arthritis in his knees, which made the hardscrabble life of a front-line soldier impossible. He was given an honourable discharge in 1953.

From that moment, his life became intolerable as he was subjected to racial prejudice, his body ruined, and his mind broken. By 1961, he had spiralled down to poverty and alcoholism. In 1977, Thomas George Prince, the most decorated Indigenous soldier, died alone at 62 at the Deer Lodge Hospital for Veterans.

Tommy George Prince was a man who held a great sense of commitment to his country but whose country, in return, did not respect that commitment or the man - not as a skilled tracker and marksman, not as a courageous soldier and certainly not as an Indigenous person. However, since his death, he has become a hero, and the Canadian Forces have made a great effort to use his name and heroism to encourage Indigenous volunteers to enlist. The Canadian Forces established the Sergeant Tommy Prince Army Training Initiative in 2000 to increase the number of Indigenous people serving in the infantry, in which Indigenous volunteers receive specialized military indoctrination, which takes into account Indigenous views and values.

In 2022, Canada Post issued a new stamp to remember and honour the life and achievements of Sergeant Thomas “Tommy” George Prince. Issuing a stamp to commemorate a decorated Indigenous veteran shines a light on the often-overlooked contributions of Indigenous veterans. It also opens the door for meaningful conversations about Canadian history that move us all along the reconciliation pathway.

This article has been updated from one originally posted on June 05, 2012.

If Indigenous war heroes are your area of interest, you might enjoy these articles; Indigenous Veterans: Equals on the Battlefields, but Not at Home and Indigenous War Heroes More than a Few Good Men.