On Wednesday June 11, 2008, the Prime Minister of Canada, the Right Honourable Stephen Harper, made a Statement of Apology to former students of Indian Residential Schools, on behalf of the Government of Canada. 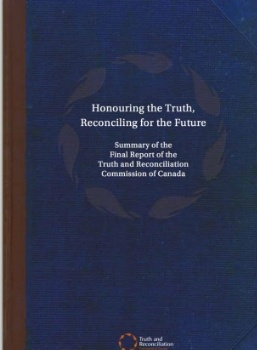 Below is the full Apology and below that is a video of the Prime Minister reading it.

The treatment of children in Indian Residential Schools is a sad chapter in our history.

For more than a century, Indian Residential Schools separated over 150,000 Aboriginal children from their families and communities. In the 1870's, the federal government, partly in order to meet its obligation to educate Aboriginal children, began to play a role in the development and administration of these schools.  Two primary objectives of the Residential Schools system were to remove and isolate children from the influence of their homes, families, traditions and cultures, and to assimilate them into the dominant culture.  These objectives were based on the assumption Aboriginal cultures and spiritual beliefs were inferior and unequal. Indeed, some sought, as it was infamously said, "to kill the Indian in the child".  Today, we recognize that this policy of assimilation was wrong, has caused great harm, and has no place in our country.

One hundred and thirty-two federally-supported schools were located in every province and territory, except Newfoundland, New Brunswick and Prince Edward Island.  Most schools were operated as "joint ventures" with Anglican, Catholic, Presbyterian or United Churches.  The Government of Canada built an educational system in which very young children were often forcibly removed from their homes, often taken far from their communities.  Many were inadequately fed, clothed and housed.  All were deprived of the care and nurturing of their parents, grandparents and communities.  First Nations, Inuit and Métis languages and cultural practices were prohibited in these schools.  Tragically, some of these children died while attending residential schools and others never returned home.

The government now recognizes that the consequences of the Indian Residential Schools policy were profoundly negative and that this policy has had a lasting and damaging impact on Aboriginal culture, heritage and language.  While some former students have spoken positively about their experiences at residential schools, these stories are far overshadowed by tragic accounts of the emotional, physical and sexual abuse and neglect of helpless children, and their separation from powerless families and communities.

The legacy of Indian Residential Schools has contributed to social problems that continue to exist in many communities today.

It has taken extraordinary courage for the thousands of survivors that have come forward to speak publicly about the abuse they suffered.  It is a testament to their resilience as individuals and to the strength of their cultures.  Regrettably, many former students are not with us today and died never having received a full apology from the Government of Canada.

The government recognizes that the absence of an apology has been an impediment to healing and reconciliation.  Therefore, on behalf of the Government of Canada and all Canadians, I stand before you, in this Chamber so central to our life as a country, to apologize to Aboriginal peoples for Canada's role in the Indian Residential Schools system.

The burden of this experience has been on your shoulders for far too long.  The burden is properly ours as a Government, and as a country.  There is no place in Canada for the attitudes that inspired the Indian Residential Schools system to ever prevail again. You have been working on recovering from this experience for a long time and in a very real sense, we are now joining you on this journey. The Government of Canada sincerely apologizes and asks the forgiveness of the Aboriginal peoples of this country for failing them so profoundly.

In moving towards healing, reconciliation and resolution of the sad legacy of Indian Residential Schools, implementation of the Indian Residential Schools Settlement Agreement began on September 19, 2007. Years of work by survivors, communities, and Aboriginal organizations culminated in an agreement that gives us a new beginning and an opportunity to move forward together in partnership.

A cornerstone of the Settlement Agreement is the Indian Residential Schools Truth and Reconciliation Commission.  This Commission presents a unique opportunity to educate all Canadians on the Indian Residential Schools system.  It will be a positive step in forging a new relationship between Aboriginal peoples and other Canadians, a relationship based on the knowledge of our shared history, a respect for each other and a desire to move forward together with a renewed understanding that strong families, strong communities and vibrant cultures and traditions will contribute to a stronger Canada for all of us.

On behalf of the Government of Canada
The Right Honourable Stephen Harper,

If you are interested in watching the residential schools' apology being read out by Prime Minister Harper, here's the link to the video