The Relationship between Indigenous Peoples and Place Names

DYK: In Canada close to 30 000 official place names are of Indigenous origin, and efforts are ongoing to restore traditional names to reflect Indigenous culture. [1] 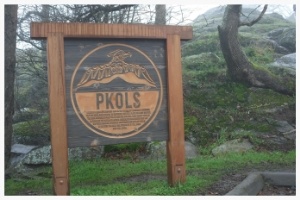 *"Located in W̱SÁNEĆ territory and on the border of Lekwungen territory, this has been and remains an important meeting place for many nations. The reclamation of PKOLS to replace the colonial name Mount Douglas recognizes the nation-to-nation agreements negotiated here and supports ongoing efforts of Indigenous and settler people to restore balanced relationships to the lands they call home"

The colonial practice of using European place names rather than the local Indigenous name speaks to view that the land was empty or “terra nullus” when waves of European explorers followed the arrival of Christopher Columbus in 1492. Nothing could be further from the truth.

Notice I use “arrived” rather than the time honoured belief that he “discovered” the Americas. Hard to fathom how one discovers a world that had an existing population of approximately 100 million people, or a fifth of the world’s population at that time. Here’s a link to a short video I shot on this topic.

The initial explorers tended to use names from their homelands. However, fur traders and the explorers who travelled across the country, relied on Indigenous guides so were more inclined to use the Indigenous names for prominent natural features, although they did use European names for trading posts. When the European settlers arrived some of Indigenous names were “Europeanized” but more often than not places/sites were named after the homeland or influential people of that particular group of settlers. Whatever the reason, the colonial habit of dismissing the Indigenous names was another attempt to erase the identity of the First Peoples which supported the assimilation policies of the colonizers.

"It's important to reclaim the names, because names are symbolic of the attitudes and ideas people bring -- of their relationship to the land and each other. If all indigenous names are erased, and never respected, it shows the white society's view of indigenous people: that we no longer exist; we've been erased.... It's about respect in a fundamental way. The future of this country is going to be one of peaceful coexistence based on mutual respect."  [1]

During a recent walk along the Tony Knowles Coastal Trail, Dena'ina historian Aaron Leggett pointed to an area that was devastated during the massive Good Friday earthquake in 1964. Trees and houses on a mile-wide stretch of earth had come tumbling down.

Had Anchorage consulted Dena'ina geography, he said, the bluffs facing Cook Inlet may not have seemed like such a good location for a neighborhood. The Dena'ina name for that area is Nen Ghiłgedi, which he translates literally as "rotten land." [2]

Indigenous Peoples: A Guide to Terminology

The above quote is an explicit example of the value of Indigenous place names. Place names are “mnemonic” devices for Indigenous peoples. As an oral society, the names chosen for geographical sites carry history, traditional environmental/ecological knowledge, navigational information, teachings - using Indigenous names keeps all of that information alive. Names also embody a sense of belonging to a place, coexistence with the natural world and the longstanding relationship between a People and their place; they anchor the past to the present.

So, if you look at place names as navigational aids there’s no better example than the Inuit. Their traditional lifestyle had them moving around their territories; they were dependent upon their ability to move freely in order to follow migratory patterns of wildlife and sea mammals. They relied heavily on landmarks for safe navigation and successful hunting.

“All the lakes where you can find fish or caribou have names. That is the only way we can travel. The one way we can recognize lakes is by their names. ... The names of places, of camps and of lakes are all important to us, for that is the way we travel – with names. ... Most of the names you come across when travelling are very old. Our ancestors named them because that is where they traveled.” [3]  Dominique Tunglik, Pelly Bay, Nunavut.17 The Sea Ice is Our Highway An Inuit Perspective on Transportation in the Arctic

There is a growing interest in and support of renaming places. In BC, Haida Gwaii,  the archipelago formerly known as the Queen Charlotte Islands (in 1787 Captain George Dixon, under orders to claim new lands and to investigate trade opportunities for Britain, named them after his ship the Queen Charlotte) was officially returned to its original name under British Columbia’s 2010 Haida Gwaii Reconciliation Act. In the name-returning ceremony two bentwood boxes, symbolically representing Queen and Charlotte were handed to government representatives.

“We received our life and our culture from Haida Gwaii. Over countless generations, our bodies are reclaimed by the lands we call Haida Gwaii. Haida Gwaii is not only where we are, this is who we are. While we cannot unwind history, we will leave colonialism behind us, as we have laid the foundation for a respectful relationship into the future. [4]

But it’s not just places that have been stripped of their history. Indigenous Peoples themselves were renamed by Indian agents, under direction from the Indian Act, with names chosen at random.

We think an additional Call-to-Action would be for governments to support the accelerated return  to Indigenous place names. *In regard to PKOLS, the park currently is known both as PKOLS and Mount Doug Park.

[3] Dominique Tunglik, Pelly Bay, Nunavut; The Sea Ice is Our Highway: An Inuit Perspective on Transportation in the Arctic

Here is some more terminology information for you - Aboriginal Peoples: A Guide to Terminology