Canada is a country whose citizens pride themselves on their diversity and promotion of pluralism yet turn a blind eye to the continued stereotypical views and depictions of First Nations people present in the media, sports, advertisements, the fashion industry and conversations.

Over the course of history, since Christopher Columbus “discovered” North America, First Nations have been depicted as blood-thirsty savages (the earliest stereotype), drunken, poor, wooden, lazy, and “casino rich” (the latest stereotype), to name a few. Then there is the other side of the stereotyping coin - romanticizing of First Nations as the Indian princess, the noble savage, the native warrior, etc.

The stereotypical depiction of Indigenous leaders, history and culture is a common theme in the realm of promoting vehicles:

“For decades, American Indian tribal names have helped to propel automobiles out of showrooms. Return with us now to the era when Pontiac’s sales brochures carried illustrations comparing its 6-cylinder engines to six red-painted, feathered cartoon Indian braves rowing a canoe.

Or review Pontiac’s marketing copy, which proclaimed that “among the names of able Indian warriors known to the white race in America, that of Pontiac, chief of the Ottawas and accepted leader of the Algonquin family of tribes, stands pre-eminent.” Of course, the visage of the chief was appropriated as a hood ornament.” [1]

As another example, the Jeep Cherokee was introduced in 1974, replaced in 2002 by the Liberty, but returned to the showroom in 2014, apparently due to market research that showed this name sold more vehicles.

There is also the ongoing controversy over the appropriation of First Nation or Native American tribal names for team mascots. Supporters often claim that the usage of Aboriginal-themed team names, logos, or mascots is intended to honour Indigenous groups and/or educate their fans. In reality, this usage reduces Indigenous Peoples and cultures to cartoons.

There is an abundance of popularly held myths and misconceptions regarding First Nations that range from they get free education and free housing, don’t pay taxes to there are no restrictions on reserve lands and many others.

If this article contributed to your awareness of stereotypical depictions of Indigenous people, you might find this one on colloquialisms interesting: Indian Giver Plus Six Other Colloquialisms to Avoid

We do a lot of onsite training with companies and governments and this is a big area of focus. We have noticed that if organizational people don't understand the significance of a workforce and worksite that is free of stereotypes, then it makes it harder to pursue organizational objectives and Indigenous relations strategies internally.

For you Indigenous Relations Specialists, much of your work is in trying to build support for your initiatives. You can take advantage of our blog to start sharing articles with colleagues and friends to help build organizational support. 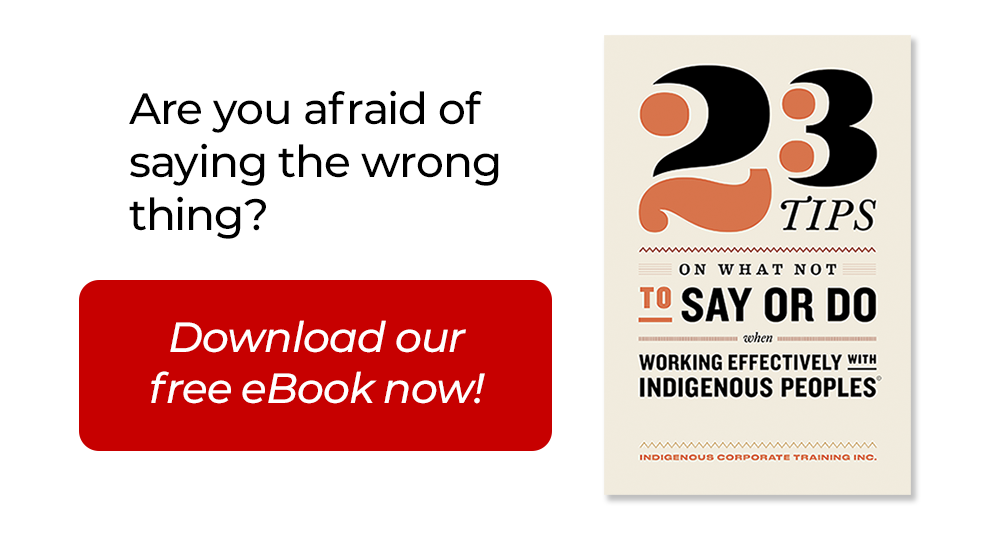