The Choctaw and the Irish Have an Enduring Bond of Gratitude

During the COVID-19 pandemic, many stories have emerged about the amazing selflessness of the front line workers, about patients who against all odds survive the ordeal, about artists in numerous genres sharing their art to buoy up the spirits of those quarantined, about neighbours helping neighbours, and about strangers helping strangers. These are stories about sacrifice, strength, courage, kindness of heart, and generosity of spirit. 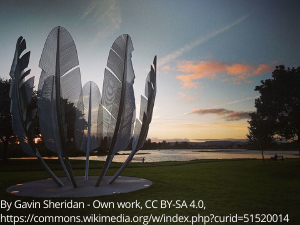 Among the multitude of examples of positivity, one that really filled me with light is the enduring  bond between the Choctaw Nation of Oklahoma and Ireland. It’s a story about a bond between two colonized cultures a world apart; their relationship exemplifies sacrifice, compassion, empathy, and gratitude.

Some background
In Canada, the Indian Act was the tool by which Indigenous Peoples were removed from their traditional lands and onto reserves in order to open up the land for European settlers, resource development, and infrastructure. In the United States, it was the Indian Removal Act that saw Indigenous Peoples moved to reservations (note that in Canada, we use reserve but in the US the term is reservation). The Indian Removal Act, signed in 1830 by President Andrew Jackson, gave the federal government the power to enact land exchanges, principally to exchange valuable cotton-growing land east of the Mississippi that was the traditional territories of certain tribal groups for land in the “Indian colonization zone” (present-day Oklahoma) in the west. These land exchanges included the forcible removal of the tribal nations who had lived on the lands since time immemorial.

And is it supposed that the wandering savage has a stronger attachment to his home than the settled, civilized Christian? Is it more afflicting to him to leave the graves of his fathers than it is to our brothers and children? Rightly considered, the policy of the General Government toward the red man is not only liberal, but generous. He is unwilling to submit to the laws of the States and mingle with their population. To save him from this alternative, or perhaps utter annihilation, the General Government kindly offers him a new home, and proposes to pay the whole expense of his removal and settlement.” [2]

It’s estimated that approximately 100,000 Indigenous people from Cherokee, Creek, Chickasaw, Choctaw, Seminole and other nations were removed from their homes and lands and forced to journey, primarily on foot and overseen by the army, a massive distance west to the “Indian Lands.” The route, now known as the “Trail of Tears” is roughly 8116 km or 5,043 miles long and covers nine states: Alabama, Arkansas, Georgia, Illinois, Kentucky, Missouri, North Carolina, Oklahoma and Tennessee. Of the estimated 100,000 who began the journey,15,000 died along the way due being malnourished and from disease. During the journey, the travelers endured harsh winters, starvation, and contaminated water; babies, young children and the elderly in particular succumbed to the extreme hardships.

The Choctaw were the first polity to finalize negotiations: in 1830 they agreed to cede their real property for western land, transportation for themselves and their goods, and logistical support during and after the journey. However, the federal government had no experience in transporting large numbers of civilians, let alone their household effects, farming equipment, and livestock. Bureaucratic ineptitude and corruption caused many Choctaw to die from exposure, malnutrition, exhaustion, and disease while traveling. [3]

Between 1830 and 1834, an estimated 14,000 members (of which 2,500 died during the journey) of the Choctaw Nation traveled the Trail of Tears. There was little support for them to recover from the journey, start anew, develop new farms, build homes and adapt to the new environment. As this work was getting underway, in June 1832, the Arkansas River burst its banks, washed away their hard work and put the relocated Choctaw in peril of famine. Again, the young and the elderly were most severely affected, weakened as they already were from the arduous journey.

Famine in Ireland
On the other side of the world, in Ireland, under the Penal Laws (1695) it was illegal for Catholics (Irish) to own land, get an education, vote, hold office, purchase land, join the army, engage in commerce, practice their religion, or speak Gaelic, their home language. The Penal Laws provided little opportunity to be anything other than a sharecropper.

The potato, introduced to Ireland in 1589 by Sir Walter Raleigh, was the staple food of the poor. It was also how peasant farmers paid their landlords. When the Potato Famine (1845 - 1852) struck, it devastated the Irish poor. They lost their staple food and their currency by which they kept their farms and homes. Starvation drove some from desperation to eat the diseased potatoes, which caused cholera and typhus. Desperate for help, people embarked on journeys across the country to the homes of their landlords to beg for food, only to be turned away.

The Potato Famine wiped out the potato crop for seven years. By the time it was over in 1852, one million people had died and another million had emigrated to Great Britain and North America to avoid dying of starvation and related diseases.

Reports of the catastrophe spread around the world. When the Choctaw Nation of Oklahoma heard about the famine, despite still recovering from their displacement and devastation to their  community and economics, they raised $170 (equivalent to $5,350 in today’s currency) for famine relief funds for the Irish.

The Choctaw digging deep and raising funds for others when they themselves were struggling reminds me of the Indigenous communities in Canada contributing to war funds for both World Wars:

Despite the many decades of poverty brought about by life on a reserve and restrictive government policies and the additional hardships induced by absence of most able bodied men who had left to join the armies, Indigenous communities felt compelled to contribute to various war funds. Approximately $44,000 was raised and donated during the First World War and during the Second World War, they raised and donated over $23,500 by “....holding dances, sales, exhibitions and rodeos; they collected scrap tires and iron. One of the most outstanding examples of Indian generosity came from Old Crow, Yukon. Old Crow Chief Moses walked from his home into Alaska, carrying the community's winter furs. After selling them, he walked back to the nearest RCMP post and handed over some $400 to be donated to the orphan children of London, England. The BBC and the government of Canada made much of this incident, sponsoring a broadcast by Indian soldiers in Britain. Before long, Old Crow had raised more money, this time for the Russian Relief Fund. Not content to rest on their laurels, the same band next contributed $330 to the relief of Chinese victims of war.” [4]

The generosity of the Choctaw over 170 years ago has not been forgotten by the Irish:

1990: Choctaw officials traveled to Ireland to participate in a ceremony of remembrance for those who died during the Famine
1992: Irish officials join Choctaw people on a commemorative march on the Trail of Tears to commemorate those who lost their lives during the relocation
1995: Mary Robinson, President of Ireland, visited the Choctaw Nation; she was made an honourary chief
2017: Kindred Spirits, an art installation of nine eagle feathers, was unveiled in Middleton, County Cork
2018: Leo Varadkar, President of Ireland, announced a scholarship program for Choctaw youth

When a GoFundMe campaign for supplies, water, and food for the Choctaw and surrounding Nations lit up on social media in Ireland the donations flowed in. “The list of recent donors reads like an Irish phone book” sums up the incredible response by the Irish. By early May, approximately 20,000 donations totaling $670,000 were from grateful Irish donors.

The comments on the donors page express deep gratitude for the historical act of generosity of the Choctaw people over 170 years ago. And that’s why this story fills me with light in these uncertain times.

[3] The Trail of Tears, Encyclopedia Britannica

[4] 14 Facts You May Not Know About Contributions of Indigenous Veterans, Working Effectively with Indigenous Peoples® Blog

In the article above I mention that in Canada it's "reserves" while in the US it's "reservations." In Canada, we don't have reservations except at
hotels, restaurants and airlines.

I note in the article the difference in terminology between "reservation" and "reserve." In Canada, we don't have reservations except at hotels, restaurants and airlines. Here's an eBook with some more communication tips. Click the image to grab your free copy.