Sweetgrass is one of the four plants (tobacco, sage, red cedar and sweetgrass) considered as sacred to First Nations, Inuit and Métis Peoples. It is known for its sweet scent, which is intensified when it rains or when burned. It is usually associated with the Prairies but is found in many different growing conditions from low meadows, forest openings, along lake shores but also in subalpine and alpine zones. It is found across North America, Northern Europe below the Arctic Circle. 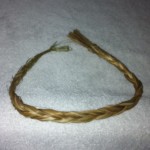 The best time to harvest it is late June to early July; never pick by pulling the stems as this will damage the root system - the best way to harvest is to cut the strands low to the ground. Taking more than needed is not acceptable, nor is damaging the clump during harvest. The best way to dry it is to lay it out in the sun for about six hours. Once it is thoroughly dried it can be used for braiding, basket making and ceremonial uses.

The Anishinaabe People follow very sacred traditions and believe that when one takes something from the Earth - for example, when sweetgrass is picked - then an explanation to the spirit about why it is being picked and how it will be used is required. The explanation is often accompanied by an offering of tobacco in return for the generosity shown by the Earth and the plant which shared itself.

Sweetgrass is used in smudges, healing or talking circles because it has a healing effect - its smoke is believed to purify thoughts, the environment and to eliminate bad or negative thoughts.

Get more articles, hints, and tips by signing up for our email list.