Spirit Bear or Kermode Bear? That is the question.

In my travels to deliver an on site training workshop earlier this week I was blessed to see a Spirit Bear or Kermode Bear up close and personal and even had a chance to take some pictures and a video. 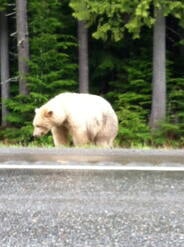 I thought what a great opportunity to learn more about the Spirit Bear. With a little bit of help we came up with a First Nation perspective from the Spirit Bear Lodge website and this is what they had to say:

“It is here in the Great Bear Rainforest that the Kitasoo/Xai’xais First Nation has lived since time immemorial. They have shared the forest and the salmon with a very special creature they call moskgm’ol (white bear).

Their legend of the origin of moskgm’ol holds that “Goo-wee (Raven) made one in every ten black bears white to remind the people of a time when glaciers covered this land and how the people should be thankful of the lush and bountiful land of today.” Many of the Kitasoo/Xai’xais believe the Spirit Bears hold super-natural powers, hence the name Spirit Bear – a name that suits its mythical like presence.”

We also found additional Spirit Bear or Kermode Bear facts from the Province of BC News Release website:

Working Effectively with Aboriginal Peoples® Tip:
When working working with Aboriginal Peoples refer to the bear first as the Spirit Bear then the Kermode Bear. For example, “You'll never guess what I saw the other day? A Spirit Bear or Kermode Bear.” If you really want to show high respect and you are working directly with the Kitasoo/Xai’xais you can refer to it as the moskgm’ol. Be sure to get the pronunciations correct though as all goodwill can be lost with poor pronunciation.

We frequently feature articles like this one in our free, weekly newsletter.