Sacred Red Cedar, along with sweetgrass, sage and tobacco, is one of the Indigenous sacred plants used by First Nations and Métis Peoples (cedar does not feature in Inuit ceremonies as it does not grow in their region). 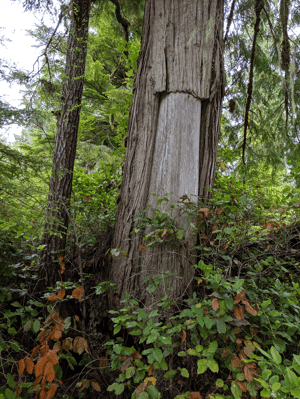 Just for clarification, what most of us think of as a cedar tree is not actually a true cedar. Western Red Cedar (and to a lesser extent Yellow Cedar), which feature in ceremonies in the Pacific Northwest, belong to the Cypress family, whereas in the eastern provinces, members of the Juniper family, which have similar characteristics, are used for ceremonies.

As with sweetgrass, cedar is burned during prayers so the smoke will carry the prayers to the Creator. In some First Nations, cedar boughs and sage are mixed together and spread on the floors of sweat lodges. Cedar is also burned to drive out negative energies and usher in positive energies, and cedar boughs are waved to purify homes. Medicinally speaking, yellow cedar bark is known to contain an anti-inflammatory agent so was used as a wound dressing. Cedar also was used in cleansing baths which involve plunging into cold water and using bundles of cedar and other medicinal plants to scrub the skin clean.

So diverse and extensive are the uses of the red cedar tree that it is frequently referred to as the “Tree of Life” - it sustained the mind, body and soul as virtually every part of the tree was used in some aspect of life - longhouses, canoes, totem poles, baskets, clothing, ropes, cooking utensils, medicines, spiritual ceremonies, ceremonial masks, hats and capes.

As an object of spiritual reverence, a prayer of respect and gratitude was/is paid to the tree before any part was harvested. Some coastal First Nations believe that if a cedar tree is harvested improperly, and without due respect and homage, then the person who felled the tree is cursed by other cedar trees.

Culturally modified trees (CMT) are living (some are standing dead but preserved) treasure troves of archaeological information about ancient harvesting techniques and the tools used. There are awe-inducing CMT specimens, primarily on First Nations land, on the coast of British Columbia, up coastal river valleys, along the shoreline and in the interior. Tragically, post-European contact, thousands of these CMTs were logged, their historical value forever lost, but thankfully nowadays, these trees are identified prior to logging and protected in order to preserve the heritage.