Changing their last names after marriage and sharing their bodies with their unborn children are two ways in which many women and mothers have given up pieces of themselves. First Nations women and mothers in Canada are no exception and no strangers to loss. Starting in 1851 and for the next 116 years, women lost their entire identity through the loss of their status due to the patrilineal Indian Act. Under section 12, the legislation stated that; “any Indian woman who married a non-Indian man would cease to be an Indian anymore.” In losing their status, Indian women also lost; treaty benefits, health benefits, the right to inherit family property, the right to live on a reserve, and lastly, the right to a burial near family on a reserve.

Prior to the Indian Act, many Indigenous Peoples came from matrilineal societies meaning that; wealth, power, and inheritance were passed down through their mothers. Their communities had women holding high positions of power who were honoured and respected through ceremonies. Women held nurturing roles and helped to ensure that cultures, languages, and traditions thrived. The role of the Clan Mother is frequently praised as an example of a powerful political role, central to the Haudenosaunee Six Nations Confederacy in which women selected the Chief and were also able to take his power away. Indigenous men respected the central role that women held and the two genders had equal power, working together to ensure balance within their communities (Hansen, 2022).

In British Columbia’s Sechelt communities, the hereditary chiefs were traditionally male but it was a woman’s job to “raise, groom and prepare future chiefs.” Women were then given the coveted responsibility of being, the “keepers and teachers of the culture” and were highly influential in all that transpired within the nation (Creese, 1992).

As non-Indigenous people began arriving in pre-confederation Canada, they also brought with them their foreign patriarchal value systems and structures. It was believed at the time that women were too dainty for manual labour and not capable of holding positions in government. The Indian Act imposed a chief-in-council system which further deteriorated women's traditional roles in politics and government by removing their traditional positions and enforcing one in which the chief is voted into his position. This belief diminished the power and control that women had and leeched into Indigenous societies enforcing the idea of women as “lesser than men” through several aggressive government policies including the matrimonial real property act and status laws.

The lasting results continue to impact Indigenous Women (Métis, Inuit, First Nations) across Canada. May 5 marks the National Day of Awareness for Missing and Murdered Indigenous Women, Girls and Two-Spirit people (MMIWG2S) in Canada. Also known as Red Dress Day. In many nations, the colour red is the only colour that spirits see; displaying and wearing red represents the hope of communicating to the spirits of the missing and murdered Indigenous women and girls and laying them to rest.

Within Indigenous worldviews, there is no separation between people and the land. Our courses titled; Working Effectively With Indigenous Peoples®, Indigenous Relations and Indigenous Consultation and Engagement can help you on your journey towards learning more about Indigenous communities, cultures, and beliefs. They live their lives with the next 7 generations in mind, this is called the Seventh Generation Principle and it involves, loving and caring for the earth and its living entities in a way that will sustain it. As Mother’s Day quickly approaches, it is important to remember that although Indigenous women are incredibly resilient and strong, they need our help. 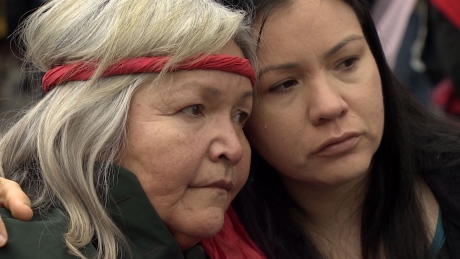 What needs to be done? Women need safe spaces to provide support, heal, and learn from each other. Their traditional knowledge needs to be shared with the next generations to ensure cultural survival and revitalization. This needs to be done in schools, workplaces, and both urban and rural communities. We can help support this by ensuring their voices are heard.. Volunteering; time, funds, resources, or food to the spaces and helping them stay safe through awareness of the spaces and what their purpose is. The role of revitalization through community kinship must be accompanied by reading the Truth and Reconciliation Commission of Canada’s Call to Action #41.

41. We call upon the federal government, in consultation with Aboriginal organizations, to appoint a public inquiry into the causes of, and remedies for, the disproportionate victimization of Aboriginal women and girls.

The inquiry’s mandate would include:

Upon reading this Call to Action, e-mail your local MLA to encourage the government to enact change and investigation into the victimization of Aboriginal women and girls. To understand the history and tribulations that Indigenous women have overcome consider taking our training, Indigenous Awareness. Be the support that you would want to have and if you are not sure how, our course First Steps as an Indigenous Ally is a great starting point. Compassionately listen to their stories and teachings. Women are life-givers, their bodies are sacred and should be treated as such. Women helping women will show others how successful we can be when we are given self-determination, self-reliance and self-government. Getting empowerment, freedom and support from each other will allow our communities and families to bloom and we can rid ourselves of inequalities in societies and instead lift each other up and shine together.