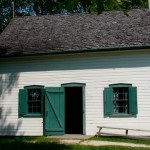 Winnipeg, Manitoba, May 23, 2013 — On behalf of the Honourable Peter Kent, Canada’s Environment Minister and Minister responsible for Parks Canada, Ms. Shelly Glover, Member of Parliament for Saint Boniface, today announced an agreement between Parks Canada and the Louis Riel Institute which will see the Institute provide educational program for students and tours for other visitors at Riel House National Historic Site in 2013.

“This agreement is a tremendous step for Riel House National Historic Site and is an example of the good things that come from working together,” said Ms. Glover. “Our Government is proud to work with the Louis Riel Institute to enhance the public’s experience at this site which is so important in the history of our province and country.”

The Louis Riel Institute has signed a license of occupation, under which they will offer curriculum-based educational programs for schoolchildren at the site in May and June 2013. In July and August, the Louis Riel Institute will offer guided tours at Riel House National Historic Site, joining Parks Canada in helping visitors to learn about the stories of Canada’s past and what it means today.

“The Manitoba Metis Federation is pleased to work with Canada, through our Louis Riel Institute, to ensure the prominent role of the Métis Nation and our contribution to building western Canada continues to be part of the Riel House student and visitor experience,” said President David Chartrand. “The Métis, under the leadership of Louis Riel, negotiated Manitoba into Confederation in 1870 and this site is an important part of that period in our country’s collective history.”

In an effort to increase the number of visitors and renew interest in the site, MP Glover brought together stakeholder and community groups to help ensure the site’s ongoing success. The agreement was reached following meetings held throughout last fall and winter between Parks Canada and community-based heritage organizations, including the Louis Riel Institute, to explore ways to enhance Parks Canada’s core services at Riel House National Historic Site for 2013.

Riel House National Historic Site, the St. Vital home of Louis Riel’s mother, is of national historic significance as a place to commemorate Louis Riel, a founder of Manitoba, and to provide an example of Métis river lots, a unique form of prairie settlement.

The Louis Riel Institute is a charitable non-profit organization that promotes the educational and cultural advancement of Métis people and awareness of the values, culture, heritage and history of the Métis people in Manitoba.

We talk about Louis Riel, senior and junior, and their role in Canadian history in our Aboriginal Awareness® and in our book "Working Effectively with Aboriginal Peoples™"