The announcement on August 30, 2018, that the Federal Court of Appeal had quashed the Trans Mountain pipeline expansion due, in part, to faulty consultation with Indigenous Peoples, has many Canadians puzzling over what meaningful consultation means. 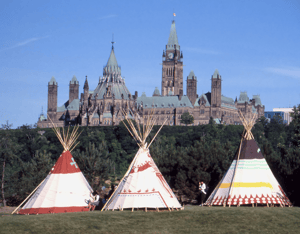 “35(1) The existing aboriginal and treaty rights of the aboriginal people in Canada are at this moment recognized and affirmed.

(3) For greater certainty, in subsection (1), “treaty rights” includes rights that now exist by way of land claims agreements or may be so acquired.

(4) Notwithstanding any other provision of this act, the aboriginal and treaty rights referred to in subsection (1) are guaranteed equally to male and female persons.” [1] (emphasis added)

It’s been over three and a half decades since the Constitution included Indigenous rights and Indigenous Peoples are still bearing the financial and emotional brunt of having to prove and defend their rights in the courts. On the other side of the coin, the ensuing lack of certainty about Indigenous rights and the duty to consult is hampering investment in resource development projects, and some claim, impacting the national economy.

When an infrastructure project such as Trans Mountain Pipeline Expansion is halted due, in part to inadequate consultation with Indigenous Peoples, there are those who claim that the interests of Indigenous People have a negative impact on the country as a whole. I disagree as Indigenous rights are part of our Constitution and therefore honouring their rights is in the interests of all Canadians.

Note taking vs Consultation
Justice Dawson delivered a review of the consultation efforts of the National Energy Board, which was representing the Crown:

[488] The extent or content of the duty of consultation is fact specific. The depth or richness of the required consultation increases with the strength of the prima facie Indigenous claim and the seriousness of the potentially adverse effect upon the claimed right or title (Haida Nation, paragraph 39; Rio Tinto Alcan Inc. v. Carrier Sekani Tribal Council, 2010 SCC 43, [2010] 2 S.C.R. 650, paragraph 36). (emphasis added) [3]

The judge’s comments point out that the NEB representatives were there to take notes and pass the information along to those who had the authority to make decisions, ergo there wasn’t any actual consultation nor any accommodation. The judge, rightly, took issue with the notetaking vs consultation aspect of the process.

[559] On the whole, the record does not disclose responsive, considered and meaningful dialogue coming back from Canada in response to the concerns expressed by the Indigenous applicants. While there are some examples of responsiveness to concerns, these limited examples are not sufficient to overcome the overall lack of response. The Supreme Court’s jurisprudence repeatedly emphasizes that dialogue must take place and must be a two-way exchange. The Crown is required to do more than to receive and document concerns and complaints. As this Court wrote in Gitxaala, at paragraph 265, speaking of the limited mandate of Canada’s representatives: When the role of Canada’s representatives is seen in this light, it is of no surprise that a number of concerns raised by Aboriginal groups— in our view, concerns very central to their legitimate interests—were left unconsidered and undiscussed. This fell well short of the conduct necessary to meet the duty to consult. [6] (emphasis added)

The precedent on meaningful consultation was articulated in 2010 in West Moberly First Nations v. British Columbia (Chief Inspector of Mines), 2010 BCSC 359: Delegation to Departmental Officials Failed to Satisfy the Honour of the Crown

[54] Further, here the Crown has delegated its duty towards First Nations peoples to departmental officials. But in so doing it has not given those officials the authority to consider fully the First Nations concerns, nor the power to accommodate those concerns. (emphasis added)

[75] I am satisfied that the Crown recognized that it had a duty to consult with and accommodate reasonably, the concerns of West Moberly. I am not satisfied, however, that in the circumstances the Crown consulted meaningfully, nor that the Crown reasonably accommodated West Moberly’s concerns about their traditional seasonal round of hunting caribou for food, for cultural reasons, and for the manufacture of practical items. [7]

Justice Eleanor Dawson sums up her decision with:

[772] As mentioned above, the concerns of the Indigenous applicants, communicated to Canada, are specific and focussed. This means the dialogue Canada must engage in can also be specific and focussed. This may serve to make the corrected consultation process brief and efficient while ensuring it is meaningful. The end result may be a short delay, but, through possible accommodation, the corrected consultation may further the objective of reconciliation with Indigenous peoples. [8] (emphasis added)

Food for thought
As described by Justice Dawson, meaningful consultation means listening to Indigenous Peoples concerns, discussing their concerns, and being prepared to accommodate those concerns. It is much, much more than note taking.

"Allegations of infringement or failure to adequately consult can be avoided by obtaining the consent of the interested Aboriginal group. This s. 35 framework permits a principled reconciliation of Aboriginal rights with the interests of all Canadians." [9]

Either way it wastes the valuable time of the community representatives, and can give an organization a black eye regarding working successfully and effectively with the community to get a project approved and into operation. It’s always good to remember that a community can tie the project up in the courts for years which is immensely costly in both legal and project delay costs and can impact investor confidence.

If you're interested in learning more about Aboriginal rights, title and the duty to consult, download our free ebook.