Indigenous or Aboriginal Which Is Correct? 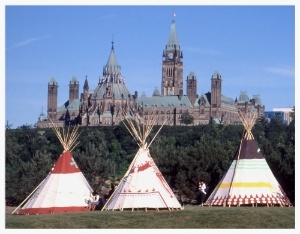 A collective noun for the original inhabitants of Canada has been a challenge ever since Christopher Columbus arrived in 1492. Believing he had landed in India it followed that the existing population would be referred to as “Indians”. Despite it being blatantly incorrect it became the de facto collective noun. Initially “Indians” included First Nations, Inuit and Metis.

Usage of the word Indian in Canada is decreasing due to its incorrect origin and connections to colonizer policies and departments such as the Indian Act, the Indian Department (precursor to INAC), Indian Agent, Indian residential schools etc. Some communities continue to use Indian in their tribal name - Osoyoos Indian Band is an example. Some individuals still refer to themselves as Indians, but in terms of a collective noun, it is rarely used. “Native” was also formerly a common term but is considered uncivil and rarely used in respectful conversations.

Aboriginal Peoples moved into popularity as the correct collective noun for First Nations, Inuit and Métis and was widely adopted by the government and many national groups. This distinction was made legal in 1982 when the Constitution Act came into being. Section 35 (2) of the Act states:

Aboriginal Peoples was a fresh step although there was resistance to its usage from some groups, as discussed in “Indigenous vs. Aboriginal”.

And now the federal government has moved to embrace Indigenous and all of its legal ramifications. By recognizing First Nations, Inuit and Metis as Indigenous Peoples, the government is acknowledging their internationally legal right to offer or withhold consent to development under the United Nations Declaration of the Rights of Indigenous Peoples, which Canada endorsed with conditions under then Prime Minister Stephen Harper.

For some more information on the significance of the government embracing Indigenous, please read “Back to the Future: PM-designate Justin Trudeau evokes the Royal Proclamation”

On a personal note, we are following suit. We have been changing the titles of our courses to Indigenous Awareness, editing our content and eBooks, and changing our website URL. It’s a big job and it will take some time so please bear with us as we make the change. However, as the constitutional definition remains "Aboriginal" we will continue to use Aboriginal when we refer to rights and title on our blog, website, eBooks and book, Working Effectively with Indigenous Peoples®.

We also receive questions on whether it is correct to use upper or lower case for Indigenous etc. You may have picked up on the lowercase aboriginal in the quote from Section 35 (2) whereas elsewhere in this article it is capitalized. Government and mainstream media lean towards lower case but we use capital letters as a show of respect just as French, English, and European are capitalized. If we are including a quote using lowercase we honour the source’s editorial style.