History of Assembly of First Nations

Every three years, the Assembly of First Nations holds an election for the Office of National Chief. This year the election will be on December 10, at the 35th Annual Assembly.


This election is unique in that it is the first time in history there has not been a sitting National Chief, as the former National Chief, Shawn A-in-chut-Atleo, stepped down from the position earlier in the year. The AFN Executive appointed AFN Regional Chief for Quebec-Labrador Ghislain Picard as spokesperson for the Executive in the interim. 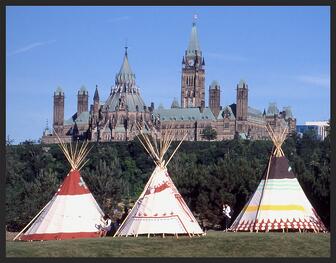 We thought it would be timely to offer a snapshot of the history of Assembly of First Nations and the election process.

Long before European contact, Aboriginal Peoples in Canada organized political bodies to represent their needs and rights. Of significance is the Iroquois Confederacy (established sometime between 1570 and 1600), a sophisticated society of over 5,500 people who belonged to six linguistically related tribes. The Great Law of Iroquois Confederacy is credited as being a contributing influence on the American Constitution. Following European contact, and ensuing efforts of assimilation, in 1927, an amendment to the Indian Act essentially banned all Indian political organisations.


Resolute and determined, efforts continued to create an umbrella organization that would represent the needs and rights of Aboriginal Peoples in Canada.

1961 - the National Indian Council was formed to represent Indigenous people of Canada - treaty/status Indians, non-status Indians, Metis, but not Inuit.

1978 - the first “All Chiefs’ Conference” was held and the topic was Indian self-government; during a following All Chiefs’ Conference, it was announced that the All Chief Conference would be the sole voice of “Indian People in Canada”; this coincided with the announcement that Canada would patriate its constitution

1982 - the first Assembly of First Nations was held

Download our "Guide to Terminology" - it's free and it's chockablock full of good information.