This article first appeared in BC Forest Professional, Volume 22 Issue 3 May - June 2015 and is reprinted with permission.

Did anyone notice that the Province didn’t officially respond to Tsilhqot’in until September 11, 2014? Why? Things have changed in a way that is hard for people to comprehend let alone respond to. As a result, for those in forestry, now more than ever we need to get our work with First Nations right. We have to be clear in our focus and in our consultation. Our engagement has to be meaningful, without mistakes. Being clear means understanding the difference between affairs vs. relationships, consultation vs. engagement, and stakeholders vs. Aboriginal Peoples. 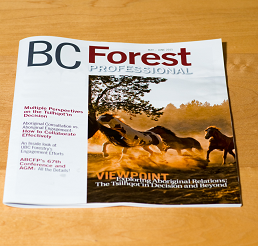 The big challenge with Aboriginal Affairs is that it is reactive. When something goes wrong we need to go deal with them. It’s definitely the federal approach. Consider the federal department - Aboriginal Affairs and Northern Development Canada. They have well over 100 years of experience working with Aboriginal communities. The department’s recent challenges include moldy houses, clean drinking water, and a plethora of other health and community issues. Do you really want to be lumped in with that perspective? In light of Tsilhqot'in I would suggest no.

Forestry operations must start building around the idea that in less than 20 years it is possible that First Nations will be the new landlords, especially if other First Nations decide to initiate court cases or new treaties start to emerge. In a recent article published by the Williams Lake Tribune on February 24, 2015 titled, “Uncertainty surrounds rights and title decision” the Minister of Aboriginal Relations and Reconciliation, John Rustad stated: “Instead of paying the province an annual fee for permits or licences for example, those fees will probably be paid to the Tsilhqot’in.”

Tsilhqot’in is just one case, but if the province can’t make the expected adjustments it could be one of many more. Remember Tsilhqot’in was triggered by forestry activity consultation. In this light, Aboriginal relations, meaning proactive and ongoing engagement with the goal of making relationships and outcomes better, gives us the perspective required to move forward in a positive light without the baggage of the past. It means shared decision making, jobs, business development, equity positions, and revenue sharing on a government to government basis and sends a message that we have changed and are committed to working together continuously on the future.

“A declaration is made that the Crown provincial had in 2000, and the Crown and Weyerhaeuser have now, legally enforceable duties to the Haida people to consult with them in good faith and to endeavour to seek workable accommodations between the aboriginal interests of the Haida people, on the one hand, and the short-term and the long-term objectives of the Crown and Weyerhaeuser to manage T.F.L. 39 and Block 6 in accordance with the public interest, both aboriginal and non-aboriginal, on the other hand.” Haida Nation v. B.C. and Weyerhaeuser, 2002 BCCA 462

So there you have it - government more so and corporations less so - have the duty to consult and if need be, seek workable accommodations. Some corporations initially took the Haida decision as the affirmation that the government has the duty to consult and should be doing this work. Sounds good in principle, but what happens if the government gets it wrong? Answer: legal challenges. From a corporate perspective timelines get pushed back, costs increase, and some projects are stalled for years.

What happens if corporations get out there early and start building lasting relationships with Aboriginal communities who are involved in the decision making process as if they are the landlords? In other words, encouraging Aboriginal communities to participate across the whole business in employment, business development, revenue sharing, and equity partnerships. These should not be employment or business development contracts with “best efforts” clauses either, as those come back to haunt you. These should be contracts with key performance indicators and penalties for failing to meeting the indicators - think equity positions for communities.

They are not stakeholders!

The term stakeholder is a commonly used business and government term that should be avoided at all costs when working with Aboriginal Peoples. While the intention in using the word - to develop meaningful relationships that encourage communication - is a good one, use of the term “stakeholder” when meeting with Aboriginal leaders and community members will likely derail your best intentions and efforts.

To illustrate, if the “Rod and Gun Club”, a stakeholder, doesn’t like your proposal they can lobby their government representative to try to make changes. They can also engage in negative media campaigns and in rare cases resort to civil disobedience.

If an Aboriginal community doesn't like your proposal they can also lobby their government representative, engage in negative media campaigns, and in rare cases resort to civil disobedience, but they can also launch legal action to protect their constitutionally protected rights thus, putting projects in immediate jeopardy and forcing proponents and governments to conduct additional engagement. Can you say show stopper? Do everything possible to avoid the use of stakeholder in your conversations and on your company stationery.

In summary, what will give you the best chance of success is - Aboriginal Relations with communities, not stakeholders, building a relationship on a future where participants are fully involved in the decision making process and benefiting with employment and business development opportunities, equity positions; as well as government revenue sharing on a nation-to-nation basis. Easy!

You don't have to do what I’m suggesting. In fact, you may have lawyers and executives saying everything is good. We are following the law of today. Equity position, employment and business development items are just extra costs the organization can’t afford. For the record, each side’s lawyers are saying they are right. Whose lawyers are right? Who correctly guessed the outcome of the decision in Tsilhqot’in before money was being spent on a legal challenge? No matter your decision - jobs, business development, equity positions, and revenue sharing or pricey legal battles and project delay costs - one thing is certain, you will spend money. In my opinion, Aboriginal relations will be less expensive and create better opportunities for long term economic certainty in post-Tsilhqot’in times. For forest professionals the choice is yours. Good luck working with the communities.

Bob Joseph provides onsite training to clients across BC and Canada. Contact him at www.ictinc.ca

If you are interested in more information on the Tsilhqot'in decision, you might enjoy this Q & A with Robert Janes, JFK Law