The severity and impact of forest fires dominate the headlines every summer. In 2016, the Fort McMurray, Alberta, wildfire invoked the largest mass evacuation in Canadian history, with nearly 90,000 people forced from their homes. Many of the evacuees were Indigenous from urban areas and reserves. 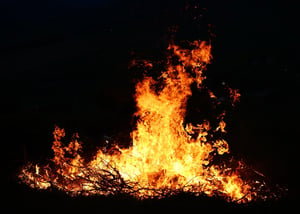 Forests and wooded areas cover more than half of Canada. Because many Indigenous communities are located in remote areas surrounded by forests, they are at particular risk.

“Our data shows that over the last 30 years there is a 33 times greater chance of being evacuated due to wildfires if you’re living on a First Nations reserve as opposed to off-reserve.” [1]

Jurisdiction
There is a disconnect in emergency and disaster responses to Indigenous communities threatened by forest fires. Which level of government - federal, provincial, or municipal - is responsible for relaying vital information or providing resources to the communities? Any delay in communication can leave a community vulnerable or in limbo.

Evacuating a remote reserve in an emergency poses some serious logistical problems. Communities often have a high number of elders and young children and not everyone has access to a vehicle or can drive.

Following the 2017 wildfire season, BC First Nation leaders submitted a proposal to the federal government outlining their recommended actions for a coordinated preparation and response to wildfires.

“List of the seven recommended actions contained in “A Proposal for a BC First Nations Emergency Management Fund to prepare for, prevent, respond to and recover from emergencies (2017)

Impact on Infrastructure
Infrastructure on reserves is often below the national standard at the “best of times.” Here’s a snapshot of the infrastructure funding allocation challenges for reserves:

The Capital Facilities and Maintenance Program (CFMP) within AANDC is the main pillar of the Government of Canada’s effort to support community infrastructure for First Nations on reserve. The program’s funding, which totals over $1 billion per year, is invested in four main areas: housing, education, water and wastewater systems, and other infrastructure (roads and bridges, fire protection, electrification, community facilities, etc.). The program has three funding streams – operations and maintenance (O&M), minor capital (for projects under $1.5 million) and major capital (for projects over $1.5 million). The Committee has heard that First Nation communities have to make difficult choices about how to distribute their capital allocations. The funds allocated under this program need to cover renovations, housing, transportation, rehabilitation, septic and water systems, school additions, access roads, upgrades, new constructions, restoration, electrification, and waste management. [4]

Loss of or damage to a community’s infrastructure exacerbates an already difficult situation.

In at least one community, the fire was so hot it melted the underground septic tanks which means the groundwater is now likely contaminated.

Band offices and houses are sometimes not insured, which means the loss of just one home or office is absolute financial devastation. It also means crowded living conditions can become more crowded as the same number of people are now living in fewer homes.

The Tahltan First Nation community Telegraph Creek was devastated by wildfires that merged into one enormous 1,180 square kilometre blaze:

"The whole nation has taken a hit. Even the homes that are still standing suffered a great amount of either water damage or smoke damage,'' she said.

"Our wildlife has been significantly hit hard. Even our rivers, we may not even be able to go home and fish for a few summers.'' [5]

Impact on culture
When a community loses its band offices, school, and some homes, it cuts a swath through the heart of the community. Community members are forced to relocate to urban areas for school and employment.

It’s hard for a community to rebuild with its members scattered to the four winds, and it’s hard for community members to keep their cultural activities intact when separated from their traditional lands and pursuits. When a building that houses critically important regalia and cultural icons is destroyed by fire it’s a loss that impacts the future of the culture.

Fires have always been part of certain Indigenous cultures but those fires are purposeful and managed. When vast areas of habitat are destroyed by wildfires harvesting and gathering traditions are impacted, and continuity of the traditions is compromised due to the need for community members to relocate for school, housing, and employment.

The ash, which coats everything and can be quite thick, can contain carcinogenic and mutagenic hydrocarbons from the combustion of the forest. So, when the habitat does recover, will the traditional foods be safe for consumption? Studies to examine the impact of fire on traditional foods are underway.

“Displacement and evacuations disproportionately affect First Nations communities across Canada, and there is evidence that evacuations and long-term displacement have negative consequences on community cohesion; mental health and psycho social well-being; and overall resilience. Evacuations can exacerbate the physical, mental, spiritual, and social impacts of a disaster.

The negative impacts of recent evacuations and the long-term displacements of First Nations communities in Canada have been documented. They clearly show how families and communities face continued suffering during and post-evacuation, affecting those remaining in the community and those placed with a host community. Displacements often result in social isolation; lack of access to traditional food; repeated moves; job insecurity; lack of, or inconsistent, access to education; and poor psychological health outcomes.” [6]

Indigenous people, in an evacuation situation, are sometimes exposed to culturally inappropriate comments and stereotyping, which contributes to their unease and impacts their mental health.

As all signs indicate a future of increased forest fires, I hope this article provides some insight into the impact of forest fires on Indigenous communities.

[2] Problems with Communications System Delay Evacuations in BC, First Nations in BC Knowledge Network, August 19, 2018

[6] From Displacement to Hope: A Guide for Displaced Indigenous Communities and Host Communities, Indigenous and Northern Affairs Canada, March 2017, p 1