Understanding First Nations Cultural Differences is key to Working Effectively with Aboriginal Peoples®.  In fact, it should be rule number one. It will drive all of our decsion making; it will require us to do research, formulate appropriate strategies, and much more.


In Canada there are 11 major langauge families broken up into over 50 dialects. British Columbia is home to seven major language familes broken up into over 30 dialects. The languages and some dialects are so distinct there is no ability for the speakers to communicate with each other. They are as different as Spanish is to Japanese, and sometimes, just as it is with other communities, they didn't even get along as evidenced in the picture below. This is a picture of a plaque that I took at the Battle of the Little Big horn memorial. It shows us that not all First Nations get along. Without research, people may be tempted to name drop.  "I just came from meeting the Crow," would not get you far if you were talking to the people they fought against! 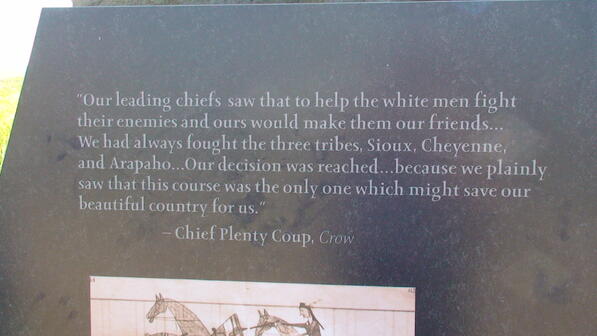 What do I mean by "cultural differences"? I mean First Nations are culturally distinct - we don't all live in tee pees, big houses, wig wams. We don't all do pow wows, potlatches, smudges, or sweats. Simply put it means that due to our cultural differences there is no blanket solution for Working Effectively with Aboriginal Peoples®.  What works with one community won't work with another.

More importantly, pick any issue and you will find supporters, detractors, and people who don't care about them at all. There is no single, simple answer, no blanket solution or magic bullet. We can, however, give you ideas about what works and what does not work.

In my public workshops I often get asked, "What do they want? Just tell me and maybe I can help them out." The answer in a world of First Nations Cultural Differences is, "I don't know, and the best thing to do is go and ask."  It will be up to practioners to figure out what a community will want.

Further, because there is so much diversity, you will have to be concerned about things such as finding out who the decision makers are in the community. This article will give you some food for thought on the subject.  First Nation Chiefs Traditional or Elected Roles and Responsibilities

There you have it. A quick look at differences and how they can impact our ability to work effectively with Aboriginal peoples.

Did you know that all this diversity will impact either negatively or positively the terminology you will use? What is the best terminology? Is it First Nation, Indian, or Native? If you would like a little help download our free guide to terminology.