First Nations' Relationship to the Land

“Indigenous peoples have the right to maintain and strengthen their distinctive spiritual relationship with their traditionally owned or otherwise occupied and used lands, territories, waters and coastal seas and other resources and to uphold their responsibilities to future generations in this regard.” [1]

Since time immemorial, First Nations have had an intricate, respectful, spiritually and physically dependent, grateful, and protective tie to the land. The nature of this tie is not so much one of ownership but one of stewardship. They feel they have been bestowed with a responsibility for the land (and sea) and all of the creatures that inhabit the land with them. This sense of responsibility is greater than an emotional tie – it is intrinsically tied to the spirits of all aspects of the earth. Traditional knowledge, languages, cultural practices and oral traditions built up over the millennia are all connected to the land. If that connection, that umbilical cord, is severed then the spiritual well-being of the affected First Nation is at stake.

Just as all First Nations are not one homogeneous group, the land is not spiritually homogeneous. Certain areas are considered sacred sites, therefore, are of significantly higher spirituality and are fundamental to the survival of First Nation culture. So, whatever undermines the sanctity of a sacred site undermines the culture of the First Nation. Access to the land and participation in land use decision-making processes to protect their spirituality, cultural practices, and traditions has been a key concern for First Nations since European contact.

The slide below is one we use in our Working Effectively with Indigenous Peoples® training: 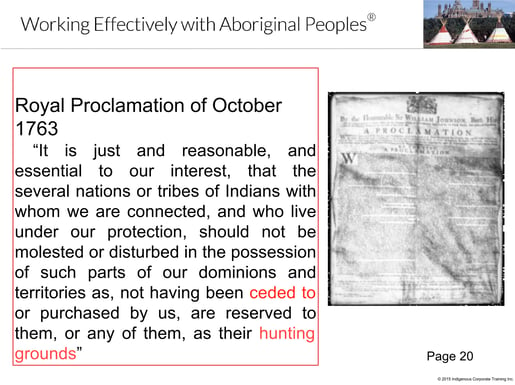 As you can see, the Royal Proclamation, signed in 1763 by King George III, has driven the relationship between the Crown and Aboriginal Peoples. The Proclamation “refers to Nations or Tribes of Indians", it recognizes them as owners of their lands when it says "ceded to us or purchased by us" and sets out what today are sometimes called “special” hunting rights.;

So, according to the Supreme Court of Canada, the First Nation relationship and ownership of the land are legally recognized and constitutionally protected in Section 35 of the Constitution Act.