As an Indigenous relations trainer, I strive to maintain a positive attitude that we are making progress on reconciliation. There are setbacks but I firmly believe we must stay the course and build on what we’ve accomplished so far, especially since the release of the Truth and Reconciliation Commission report and calls to action in 2015, many of which included calls for skills-based training in intercultural competency, conflict resolution, human rights, and anti-racism. 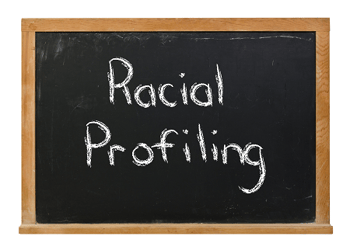 The media attention these days has been on what should have been a rite of passage for a young Indigenous girl when she and her grandfather went to open her first account at a Bank of Montreal (BMO) branch but degenerated into a situation in which both grandfather and granddaughter were placed in handcuffs, in police custody, and accused of fraud (they were cleared of the charge later the same day), following a 911 call from the bank to the Vancouver Police Department (VPD). The grandfather has had an account with that branch since 2014, and had made an appointment the day before regarding opening of the account. The premise for the 911 call and suspected fraudulent activity was that there were discrepancies in their status card ID numbers.

“Experts say what happened to Johnson is part of what they call a rise in "commercial racial profiling."

"The pattern tends to be that when you see a person of colour, the person is treated rather with a lack of respect, a lack of professional courtesy … and automatic assumption of guilt and criminal activity," said Fo Niemi, executive director of the Centre for Research-Action on Race Relations in Montreal.” [1]

So now you have an understanding of what commercial racial profiling is and I’ll leave it to readers to decide if this situation fits.

At this point in the conversation apologies have been made as have commitments to undertake work to address errors in judgement. It is important to realize the thought processes, assumptions, and decision-making processes on both the part of the BMO and VPD have led to public outrage, a barrage of negative comments on social media and hashtags such as #BoycottBMO #SociallyAcceptedRacism #IdleNoMore #VPDRacism populating related threads on Twitter.

There’s also been intense heavy local coverage in the media and the actions garnered national and international coverage. Protests were held outside the bank branch. Some BMO customers have closed their accounts. The grandfather has launched a human rights case against the bank and police department. It’s what’s known as a public relations disaster for both organizations.

The CBC reporter, Angela Sterritt, who broke the story asked BMO repeatedly for over a week for a response to her five questions. Requests from other media outlets also went unanswered. The Assembly of First Nations National Chief Perry Bellegarde also called on BMO to respond. 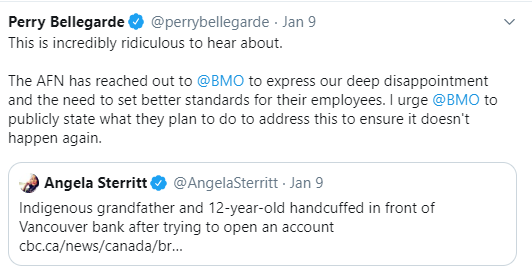 Ernie Johannson, Group Head, North American Personal Banking at BMO, also spoke publicly about the situation and how it was handled but did not explain why the bank took so long to respond. She said, as it works towards a “better cultural understanding of our Indigenous community”, the bank has assembled an Indigenous advisory council, comprised of eight Indigenous leaders, and scheduled two sharing circles."

“It is important that there be a thorough and independent investigation of this matter. The investigation will carefully examine and assess the circumstances of this incident including the legal authority to detain, arrest and use restraining devices such as handcuffs as well as any relevant questions of policy or training.”

Vancouver mayor Kennedy Stewart, who is also Chair of VPD, has issued a statement saying he felt ill when he heard about the incident and that he would be meeting with the Police Board to get to the bottom of what transpired.

Mayor Stewart is holding BMO to account for triggering the incident and for the damage done to reconciliation efforts of the city. In an interview with CBC Early Edition host Stephen Quinn he had this to say:

“We’re supposed to be a city of reconciliation . . . And that’s why I felt so ill because this council has been working so hard to make reparations to work as partners in planning and moving forward and this sets us back. . . I am really mad at this organization that has definitely benefited immensely from colonization and has a duty to help us reconcile. Running away from the issue is not what they need to do, it’s not helping.”

Could that young girl and her grandfather have had an unremarkable trip to the bank to open an account if the organizations involved had followed the TRC’s calls to action for Business and Reconciliation?

#92. Business and Reconciliation
iii. Provide education for management and staff on the history of Aboriginal peoples, including the history and legacy of residential schools, the United Nations Declaration on the Rights of Indigenous Peoples, Treaties and Aboriginal rights, Indigenous law, and Aboriginal–Crown relations. This will require skills-based training in intercultural competency, conflict resolution, human rights, and anti-racism.[emphasis added]


It depends on the training provided.

Members of the VPD state that they have taken Indigenous cultural competency training recently. But in light of this incident many are questioning the effectiveness and frequency of the training. In December 2019, a BC Human Rights Tribunal ruled that VPD officers discriminated against an Indigenous mother in 2016 when she witnessed them arrest her son. As part of the ruling, the Police Board was ordered to pay the mother $20,000 in damages and to provide better training to police who are working with Indigenous people.

Professional curiosity drove me to look into the ruling to see what sort of training was provided to the VPD and found this:

“In this decision, I have specifically found that the officers’ lack of training and preparedness laid the groundwork for discrimination. The VPB has made a public commitment to build bridges with Indigenous communities and, under the leadership of Cst. Lavallee, is making headway.

However, it is clear that more needs to be done on to ensure its own officers are not out in the streets undermining that work. The half-day of cultural awareness training that new recruits receive, and that some members of the department received in 2015, is insufficient. The officers involved in this case could remember very little about that training, except that they should treat Indigenous people with respect. Cst. Ellis agreed he would benefit from more training. He testified:

Would it have been to my benefit to have had more immersion in the darker side of Indigenous history in Vancouver and the Lower Mainland and across Canada? That would have been of great benefit. I don’t think enough time [was spent on this]… In my recollection, it was a minor component of the training that we did. But it would have … been to my benefit, and my classmates’ benefit, if it had been a bigger component.” [p. 48 of the ruling]

As evidenced by the VPD’s experience with intercultural competency training, not all training is created equal nor is all training effective. It concerns me that since the TRC recommendations  many people are hanging out their shingles as trainers. My concern is that organizations are engaging providers to deliver courses that don’t contribute to behavioural change. There is a difference between cultural sensitivity training and the skills-based training called for by the TRC.

From my perspective, effective training has to be consistent, ongoing and linked to performance - have the recipients been given the information and tools required to change their knowledge, skills and attitude which is the definition of competency based training. Training has to be tied to better actions on the job. If it isn’t, then you’re wasting your money and you’re wasting your employees time, and you’re causing distress and creating unsafe situations for Indigenous people, employees and the potential damage to the reputation of your organization.

In this interview on the CBC Early Edition, I talk about the need in training to address the myths and misconceptions about Indigenous Peoples. If people understand the source of those misconceptions they will be less likely to jump to conclusions or make assumptions . . . and we all know what they say about those who assume.

You can listen to the full interview here: The need for cultural sensitivity training in corporate culture rises in wake of arrest of Indigenous man and granddaughter

An ounce of prevention is worth a pound of cure. We think the time and resources an organization might spend on damage control would be better used to provide resources to management and employees at the other end so that this situation doesn’t arise again.

If there is a silver lining on the recent situation involving a bank calling the police when an Indigenous client tried to open a bank account for his granddaughter, a situation that saw both individuals handcuffed, it is the shocked response from the public. It raised awareness and gave insight into the occurrences of racism Indigenous people experience as they go about their daily business. It also underscores the need for ongoing and effective skills-based training for frontline and management staff.

If you are interested in some suggestions on what to look for when selecting an Indigenous awareness or cultural competency trainer, here’s a selection of articles from our blog Working Effectively with Indigenous Peoples®:

Here's a free eBook for you. We delve into nine common myths about Indigenous Peoples and provide the associated realities.