Canada has a complicated history with the totem pole. Totems have been misunderstood, coveted, stolen, quashed, copied, and celebrated.

The first recorded mention of a pole, which was a house pole,  was on Langara Island in the Haida village of Dadans, c.1790, by John Bartlett, who wrote:

“We went ashore where one of their winter houses stood. The entrance was cut out of a large tree and carved all the way up and down. The door was made like a man's head and the passage the house was between his teeth and was built before they knew the use of iron." 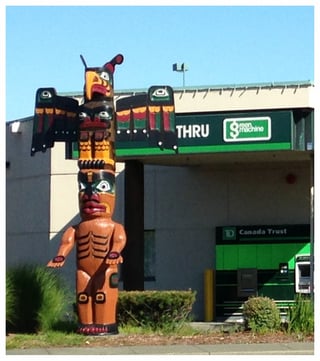 European explorers were said to have been astonished that “savages” were capable of architectural creations that rivalled those of celebrated artists in their home countries. The cedar poles and posts on Haida Gwaii that so impressed these explorers were carved with tools made from stone, shells, or beaver teeth. It wasn’t until trading relationships were established along the Pacific coast that iron and steel tools were introduced. The new tools enabled carvers to create more intricate and complex features and the creation of totem poles and posts flourished amongst west coast communities.

Christian missionaries generally misunderstood the purposes of totem poles or the meaning behind the designs. It was assumed the designs were of pagan idols and as such, obstructed their work  to convert Indigenous Peoples to Christianity. The missionaries discouraged new poles and even managed to convince some communities to destroy existing poles.

In 1884, the federal government, which believed that Indigenous cultural activities, beliefs and traditions were obstructing its goal of assimilation, passed the Potlatch Law in 1884. This law provided the perfect setting for the apprehension of poles (and other cultural items) by collectors, government officials, and ethnologists. The removal of poles and artifacts was justified as acts of “preserving” them as the art was considered to be “dying” and they were dispersed to museums and collections around the world.

In 1950, Marius Barbeau, ethnographer, and lifelong employee of  the Canadian Museum of Civilization, wrote Totem Poles.  His dedication reads:

“Let this book be a memorial to the native artists of the Pacific Coast!

Their genius has produced monumental works of art on a par with the most original the world has ever seen.

They belong one and all to our continent and our time, and have shown how creative power may thrive in remote places. Independent of our great moderns, from Turner to Gaugin, Van Gogh, and Cézanne, they were nevertheless their contemporaries.” [1]

And his introduction includes:

“The art of carving poles belongs to the past. Racial customs and stamina are on the wane everywhere, even in their former strongholds…..totem poles are no longer made.” [2]

The connection between the long period of cultural suppression (1884 - 1951) and the scarcity of poles seems to not have been made, or was not acknowledged.

To provide context to my reference to the “complicated history” of Canada and totem poles here is an example. In 1958, just a  few short years after the ban was lifted, the federal government commissioned Kwakwaka'wakw carver Mungo Martin to carve a 30 meter pole as a gift for the Queen of England to commemorate the 100th birthday of British Columbia. How ironic is that?

So what became of the poles that were stolen from communities? Some are simply gone, some are in museums, and some have been tracked down and are being repatriated. Here’s the story of the G’ps Golox pole and the efforts of the Haisla Nation to bring it home.

In the 1990s, the  Haida Repatriation Committee, in conjunction with the Haida Gwaii Museum and the Haida Heritage and Repatriation Society began the long and uncharted process of repatriation. Here is a collection of articles on repatriation from our blog Working Effectively with Indigenous Peoples®

Despite premonitions of the demise of the art of carving poles and attempts to eradicate the tradition, the art and tradition of totem poles has survived and is thriving. Check back soon for the next article in which the different types of poles are described.

Grab your free copy of our Indigenous Peoples: A Guide to Terminology