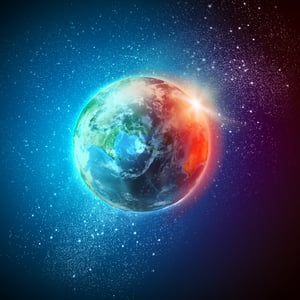 But, Indigenous Peoples around the world have studied the skies since time immemorial and developed astronomical knowledge systems which were woven into their specific spiritual, cultural and social lives. Indigenous Peoples have always observed the skies as they have always observed all aspects of weather, seasonal cycles, and bird and animal migration and breeding patterns. All these observations have been woven into the Indigenous knowledge of a particular culture and shared through generations. This interweaving of the knowledge of the skies and the land into cultural beliefs and practices grounds Indigenous cultures and affirms who they are as a People.

Take the Big and Little Dipper for example. Their Latin names are “Ursa Major” and “Ursa Minor” or “the greater she-bear” and “lesser she-bear”. But that’s not necessarily what Indigenous people see when they look up at the night sky.

While there is a vast variety of legends amongst Indigenous cultures about these star groups that are regionally distinct, there is a recurring theme in some Indigenous cultures about the seven stars in the Big Dipper. These legends feature seven children, generally six brothers and their sister, who are forced to flee into the sky to escape from a harmful pursuer. The Inuit, while not a homogenous culture, generally share a common cosmology. When they look up they don’t see dippers or bears. They see a caribou, or herd of caribou in the larger constellation, and know it as “Tukturjuit”. [1] The North Star is known as “Nuuttuittuq” or “the one that never moves.” [2]

The three bright stars variously known in western cultures as Orion’s Belt, the Three Kings or Three Sisters, is known as Ullaktut [3], or three runners or hunters in Inuit cultures. In some Cree cultures, the three stars are known as the Three Chiefs. [4]

Celestial mythology, or storytelling, about constellations has been shared through the generations. The telling and re-telling of elaborate and dramatic stories (known as “sky stories” in some cultures) about the stars and constellations created mental maps of the night sky. For the Inuit, these mental maps were critical for navigational purposes especially during the months of total darkness.

Here’s a link to a resource with some suggestions for more reading on sky stories: Resource Guide for Canadian Aboriginal Astronomy (May 2010)

The appearance of certain stars at certain times of the year also guided seasonal agricultural, hunting, and gathering activities. Depending on the culture, changes in the seasons are marked with celebration and ceremony.

Returning to the opening paragraph about star names, there have been some changes in how newly discovered stars are named. The International Astronomical Union’s Division C Working Group on Star Names (WGSN) has formally approved 86 new names for stars drawn from those used by other cultures, namely Australian Aboriginal, Chinese, Coptic, Hindu, Mayan, Polynesian, and South African.

"The IAU Working Group on Star Names is researching traditional star names from cultures around the world and adopting unique names and spellings to avoid confusion in astronomical catalogues and star atlases," says Eric Mamajek, chair and organiser of the WGSN. "These names help ensure that intangible astronomical heritage from skywatchers around the world, and across the centuries, are preserved for use in an era of exoplanetary systems." [5]

[6] IAU approves 86 new star names from around the world