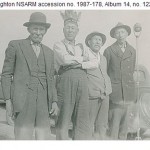 The Mi’kmaq Nation belonged to a much larger tribal grouping known as the ‘Wabanaki Confederacy,’ which included the Mi’kmaq, Maliseet, Passamaquoddy, Penobscot, and Abenaki tribes of Eastern North America. Pre-contact, the Mi’kmaq Nation was divided into seven districts, each led by a District Chief. Together, they made up the Mi’kmaq Grand Council, which governed by consensus over the entire territory and its people.

A Mi’kmaq legend spoke of blue-eyed people arriving from the east and disrupting their lives which contributed to the initial, relative acceptance of the arrival of the Europeans - unlike the interaction of the Beothuks and Europeans, which led ultimately to the extinction of the Beothuk People.

The Mi’kmaq developed a good relationship with the French settlers, as newcomers treated them well and tended towards a commercial economy which encouraged trade with the Mi’kmaq. Eventually, there were marriages between the French colonists in Acadia and the Mi’kmaq; the children from these unions were welcome in both cultures, further cementing the relationship. The bonds between the two remain solid today.

Relations, however, with the British were hostile, as the British were intent on settlement and agriculture which put them in direct competition for the best arable land, historically land that had been tended by Mi’kmaq. British settlements and farms encroached on the cultural habits of the Mi’kmaq and disturbed the habitat of caribou and other traditional food sources.

In what is now Nova Scotia and New Brunswick, hard, fierce battles were fought between the Mi’kmaq and the British as the Mi’kmaq struggled to stop the takeover of their lands by the British settlers. After the French lost control of Acadia in 1710, the British, increasingly uncomfortable with the bond between the Acadians and the Mi’kmaq, went so far as to ban social interaction between the two groups. This fear, additionally fed by raids by the Mi’kmaq on British settlements, grew to the atrocious point that the British offered bounties for the scalps of Mi’kmaq men, women and children. The 1749 Scalp Proclamation was decreed, and as such, was designed to wipe out the entire Nation by offering bounties for scalps of men, women and children; it was rescinded in 1752 but skirmishes between the British and Mi’kmaq led to Nova Scotia Governor, Charles Lawrence, to enact the British Scalp Proclamation of 1756 which offered a bounty for every live male prisoner over 16 and a slightly reduced bounty for the scalp of every male prisoner 16 and over; equal bounties were offered for women and children prisoners - with the incentive being on prisoners as opposed to scalps, it was not quite as devastating as the 1749 Scalp Proclamation.

Yet, during this period, the Mi’kmaq trustingly signed a series of peace and friendship treaties with the British, each one later violated by the British. Ultimately, the Mi’kmaq People were separated from their lands, and their families and communities broken up by artificial borders imposed by the Europeans - the divide and conquer approach used by many governments in their approach to First Nations relations.

On August 31, 2010 after a three-year pilot period, the thirteen Mi'kmaq communities through the Assembly of Nova Scotia Mi'kmaq Chiefs signed a historic agreement with the Governments of Canada and Nova Scotia. The Mi'kmaq-Nova Scotia-Canada Consultation Terms of Reference lays out a consultation process for the parties to follow when governments are making decisions that have the potential to adversely impact asserted Mi'kmaq Aboriginal and Treaty rights.

Photo  the Helen Creighton Collection at the Nova Scotia Archives

If you found "The Mi'kmaq People of Nova Scotia" interesting, you might also appreciate this article on the Beothuks of Newfoundland.

These articles appeared in our weekly newsletter. If you would like to receive it, sign up here. It's free!