The Final Solution - Which Government Used the Term First?

Question - who used the term first?

The Nazi Party of Germany termed its policy of extermination of Jewish men, women and children during World War II as the Final Solution to the Jewish Question.

Duncan Campbell Scott used the term in 1910 to describe the goal of the Department of Indian Affairs in dealing with the Indian Problem.

“It is readily acknowledged that Indian children lose their natural resistance to illness by habitating so closely in these schools, and that they die at a much higher rate than in their villages. But this alone does not justify a change in the policy of this Department, which is being geared towards the final solution of our Indian Problem." [1] 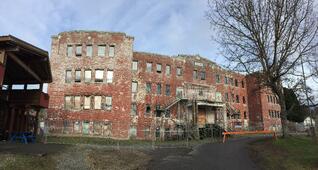 Scott, who held positions within the Department of Indian Affairs for 52 years, used the term in a letter to an Indian agent in BC. The letter was in regard to a 1907 report by Dr. Peter Bryce, Chief Medical Officer for the Department of Indian Affairs, on the horrific conditions and high rate of tuberculosis in children in residential schools. Bryce’s Report on the Indian Schools of Manitoba and the North West Territories, was quashed and recommendations on measurements needed to improve conditions were ignored.

Four years later, Scott acknowledged that “insufficient care was exercised in the admission of children in the schools. The well-known predisposition of Indians to tuberculosis resulted in a very large percentage of deaths among the pupils. They were housed in buildings not carefully designed for school purposes, and these buildings became infected and dangerous to the inmates. It is quite within the mark to say that fifty per cent of the children who passed through these schools did not live to benefit from the education which they had received.” [2] [emphasis added]

Yet, in 1920, six years after acknowledging the high death rate of the children, the government amended the Indian Act to make it compulsory for all status Indian children to attend residential schools. Under this amendment, the Indian agent was given the power to enter the home and seize the children, with or without the assistance of a law enforcement officer. Parents who hid their children faced arrest and or imprisonment. Much can be read into the intent of this particular amendment, given Scott’s usage of “final solution”.

The “spirit and intent” of residential school policies is only just being realized. Recognition of the aggressive policies of assimilation that devolved into what has been acknowledged as “cultural genocide” [3] is part of the reconciliation process.

Understanding the historical and ongoing impacts of the Indian Act is a key component for reconciliation. This slim little book provides that understanding. You can order your copy by clicking the book cover image.